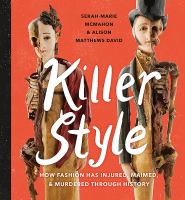 How Fashion Has Injured, Maimed, and Murdered Through History

You can find a review of this book in the Summary section.

You can find a review of this book in the Summary section.

Fashion and the fashion industry have harmed, injured and killed people at various times throughout history. This may be surprising, but there are plenty of examples.
After Marie Curie discovered radium, it began to be added to various brands of lipsticks, soaps, watches and other products. Soon, many factory workers who helped to produce these goods began to fall very sick with radium poisoning. Many of them died in only a few years, their corpses sometimes remaining radioactive for many years.
Lead, which was sometimes used in the manufacture of face powder and Kohl because it adheres so well to skin, can accumulate in human bones and eventually harm almost every organ system in the body.
Everyone knows now that mercury is very toxic but in the 18th century, its danger unknown, the substance was often added to the fur used in making men’s top hats. The mercury was most dangerous to the hatmakers, who often suffered from paranoia, convulsions and other resulting conditions.
In the late Victorian era, an inexpensive type of warm cotton flannelette was used widely in the manufacture of children’s sleepwear. However, this material proved to be especially flammable. Many homes used open flames for cooking and heating at that time and in one five-year period in England, 1,816 children burned to death while wearing flannelette clothing.
The list of dangerous fashion products also includes long scarves, very high heels, tight skirts and others.
Killer Style is a fascinating, illustrated summary of ways in which fashion has harmed and killed. The book is a worthy nominee for the new 2020 Yellow Cedar Award, to be given annually by the Ontario Library Association. It, and other nominated titles, can be found at the Stratford Public Library.
** Recommended for ages 9 years and up.
- Reviewed by Sally Hengeveld, librarian, Stratford Public Library, Dec. 2019

There are no age suitabilities for this title yet.

There are no notices for this title yet.

There are no quotes for this title yet.

Find it at SPL